You are not like anyone else, and that gives you power!

This statement is no cliché , nor an arrogant assumption. This truth should live vibrantly within your heart as your confidence in a world that desires to mold and shape you into a clone of its superficial ideals and philosophies of what your life should be about.

Let’s go on a journey as I reveal to you the power of knowing your distinction (knowing who you really are) – therein lies your true power and what makes you valuable to the world around you.

Interestingly enough, as a young devout member of the Christian faith, I have grown a little frustrated at times with the lack of revelation that exists in some Christian sects dealing with the realities of the new creation we have become in Christ and all that is available to us through His sacrifice (2 Corinthians 5:17; Ephesians 1:3). An egregious amount of time and focus is often given to the sin condition of humanity and not enough focus on the divine identity that Christ bestows upon all those who believe in Him.

Our new reality is that Christ took our condition of sin and gave us His condition of glorious righteousness, power, authority and distinction upon the earth. In His distinct definition of who we now He says, “You are the salt of the earth…” do not lose the distinct flavor you give to the world around you (Mathew 5:13). He says that we are the “light of the world,” we cannot be hidden nor can we fit into societal norms and expectations! We have been called to lead the world, not follow it (Mathew 5:14). When Christ came into our hearts He turned our inner distinction switch on! We are, undoubtedly, unique in nature and unlike anyone else on the planet (1 Peter 2:9 AMP)!

So, what kind of power should this knowledge of distinction activate on the inside of you?

As the light in a perverse world we should commit ourselves to ground our hearts in these truths every day as it releases the power to make us unstoppable and unlike anyone else who ever walked the face of the earth. Yes, Christ took away our sins, but He didn’t stop there. He gave us His identity of distinction and righteousness that in all things, we are called “more than conquerors and gain an overwhelming victory through Him who loved us (so much that He died for us)” (Romans 8:37 AMP). 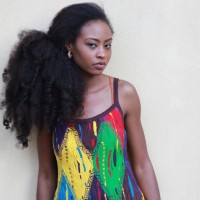 Angelique is a passionate woman of faith, eager to see others arise and understand their God-given purpose. She desires to share both spiritual and natural tools to help people of all walks of life break barriers delaying their growth. She believes the process towards fulfilling destiny requires proper navigation and wisdom. Angelique’s purpose is to offer the insight and spiritual navigational tools you need to adapt to your unique journey and fulfill your specific destiny.

« The Weapon of Prayer: Why You Should Protect Your Life’s Vision with Prayer
Vision Board Party 2017 + Clothing Drive »